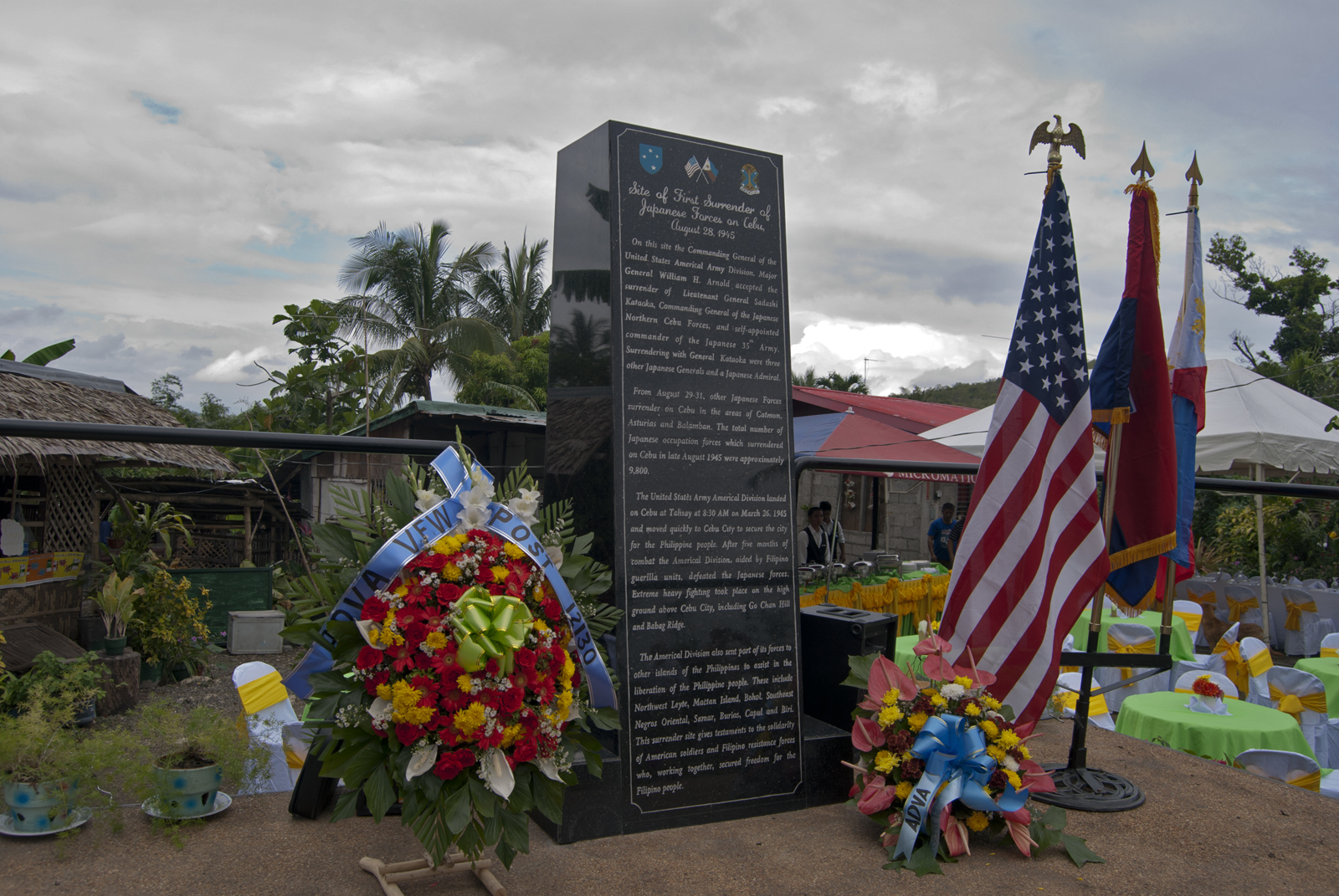 I’ve been watching a film of the August 1945 surrender of Japanese forces on the island of Cebu in the Philippines (you can watch it here). There is just a bit under 10 minutes of footage posted online. I noticed that there are a number of wide shots, showing the background. This got me thinking about where precisely the ceremony took place. In March 2015 I traveled to Cebu to visit key World War II battle sites, and follow the path of the Americal Division in liberating the island from Japanese occupation. Our trip ended in the far north of the island, near Ilihan, where a new monument was dedicated at the surrender site (read the story here). The land for the monument was generously donated by Mrs. Eusebia Ycot, who was present at the surrender ceremony 70 years earlier.

A comparison to the 1945 film footage shows that the terrain has changed a bit. The tree cover seems a bit denser in 2015 than in 1945, though this may just be a function of where I was standing. Many of the shots in the middle portion of the film show a vista of rolling hills – a view I don’t recall seeing during our trip. One of the other struggles is that this is not a film transfer, so the footage is a bit blurry. It is difficult to pick out details.

The camera pans repeatedly to follow Japanese and American soldiers moving in the field, giving a good view of the terrain. I studied the film, looking for anything that I could use to compare to photos that I took in 2015. I immediately focused on the footage beginning at 3:15, just following the formal surrender. In the background, two small hills can be seen. There appears to be some similarity to two small hills in a photo I took in 2015. It is not an exact match, as I believe that the perspective is a bit off. From what I can surmise, I believe that the 1945 film camera footage was taken from a vantage point slightly different than mine. I think if I were to have walked forward and to the left a few hundred yards, I may have been on the exact spot of the surrender.The hills in my photograph were to the north, and we were told that the Japanese troops marched down from these hills to the surrender site. Thus, the fact that Japanese troops are standing with their backs to the hills is another small clue. For a side-by-side comparison, I stitched three frames of the 1945 film footage together and lined it up next to my 2015 photo, which can be seen in Photo 1.

There are two other noticeable terrain features in the film footage. The footage at various times shows a road in the background, with a gully between the road and the foreground. I don’t recall a gully that deep, but it was a hectic day when we visited in March 2015. I found nothing else distinctive in the footage, in part due to the poor resolution of the transfer.

Based on where I was standing when I took that photo in relation to the new monument (the monument would be off to the right of the photo, maybe 100 yards away), I suspect that the surrender most likely took place a few hundred yards off the main road, perhaps almost directly behind the location of the monument. Unfortunately, unless I have a chance to travel to the Philippines again the future, I can’t be much more accurate than that.

That the purpose of this Corporation shall be fraternal, patriotic, historical, charitable, and educational: to preserve and strengthen comradeship among its members; to assist worthy comrades; to perpetuate the memory and history of our dead; and to assist their widows and orphans; to maintain true allegiance to the Government of the United States of America, and fidelity to its Constitution and laws; to foster true patriotism; to maintain and extend the institutions of American freedom, and to preserve and defend the United States from all her enemies.